USE OF ARTIFICIAL INTELLIGENCE FOR GLOBAL GREENHOUSE GASES

Climate change has been a critical problem that requires rapid action in today’s Digital world to save our planet. Its impacts are already being felt globally and the negative effects are expected to grow exponentially, with disproportionate consequences for the world’s most marginalized communities. Tackling climate change requires action across society, spanning many communities, approaches, and tools. After a detailed analysis and research, Ai labs has done has developed and implemented a Proof of Concept (POC) using its proprietary engine Minsky™ to highlight the effects of Climate change.
Ai Labs has developed several Green projects such as Renewable Energy, Water treatment, Greenhouse gas emission from power generators. The objective of this case study is to predict hazardous gas emissions based on current human life styles and the Industrial revolution

After comprehensively evaluating the client‘s challenges/data, we used Minsky™ to accurately model the historical data which comprised Population and house-hold size, number of automobiles, Fuel prices, Earth’s temperature, congestion index, travel etc. This project was modelled in two different parts:
1. Minsky™ was used to predict the total GHG emissions based on the above attributes which showed that CO2 emissions had the most significant impact on Climate change.
2. Then, the data was further modelled and analysed to predict which attributes contributed to the CO2 emissions.
Once the detailed modelling was performed by Minsky™ for the selected Algorithms, historical data was used by Minsky™ to predict emission of hazardous gases like carbon monoxide, carbon dioxide and nitrogen oxide. Prediction data from Minsky™ was also integrated with 3rd Party data visualization application like Tableau. 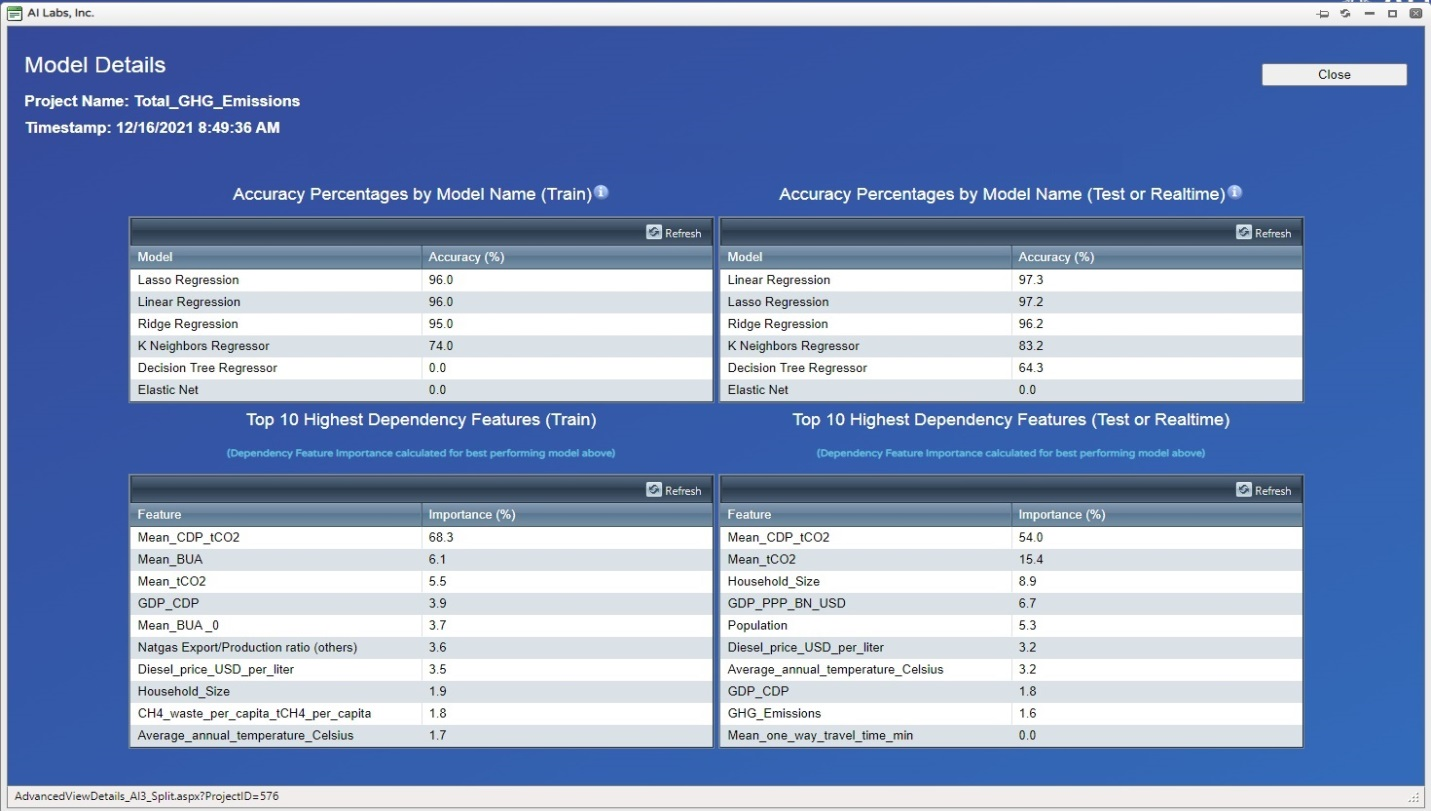 Based on the data from Fig 1 above, our analysis shows that Linear Regression (97.3%) and Lasso Regression (97.2%) gave the highest model accuracy. In terms of the GHG attributes data, the Mean Metric tons of Carbon dioxide collected from CDP (Carbon Disclosure Project Survey) showed the highest dependency cause for the Total GHG emissions followed by Metric tons of Carbon dioxide (Mean TCo2) as reported by other sources & Household Size. In summary, the Results show that the total GHG Emissions is dominated by Co2 and household size (or population) 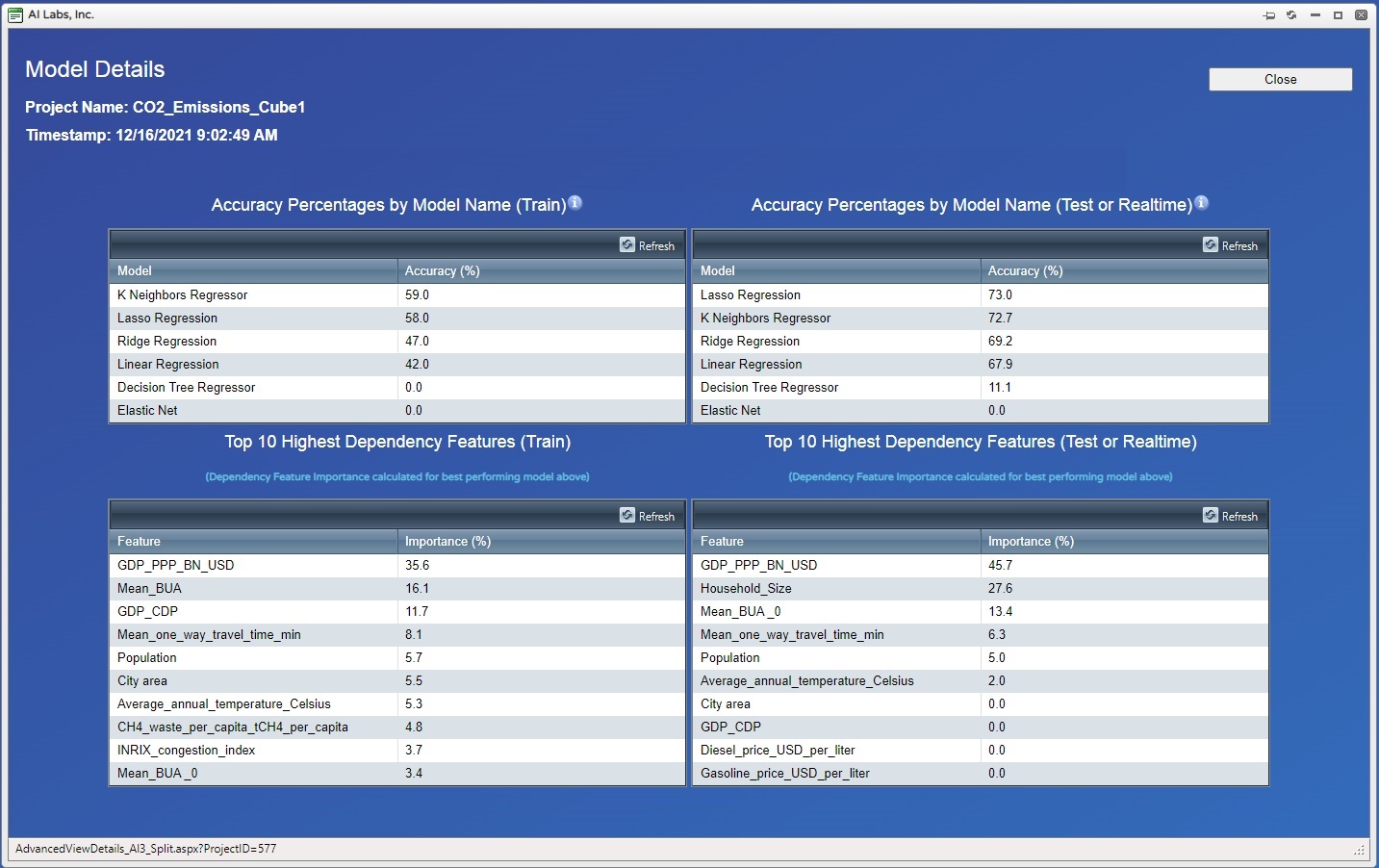 Data in Fig 2 represent Minsky™ results showing the factors contributing to CO2 emissions. Based on the data from Fig 2 above, our analysis shows that Lasso Regression gave the highest model accuracy based on our limited Train and Test data. In terms of the GHG attributes data, the metric GDP_PPP_BN_USD (Carbon dioxide emission per unit) showed the highest dependency for the Co2 emissions followed by Household size & Built up Area grid (Mean_BUA) where BUAs reflect the increase in the built environment due to activities related to urban life, such as housing construction as derived from Landsat imagery collections.

Ready to get started? lt's fast, free and very easy!

Using our Proprietary Ai Engine, we are committed to simplifying the complex use cases in Artificial Intelligence to advance the science & Technology that benefits humanity.